Singing for the Brain 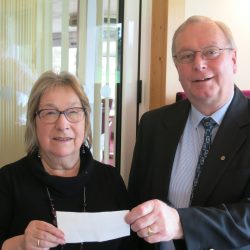 PP Tony Burnside introduced Angela Dennis who was representing ‘Singing for the Brain” an adjunct of the Alzheimer’s Society.

Angela had graduated in music in 1995 majoring in the voice and music for people with special needs. She had practiced as a Natural Voice Practitioner for some years working for the Alzheimer’s Society as a Singing for the Brain leader in N E Essex for the past four years. Her work involved holding singing sessions for both groups or individuals.

Angela proceeded to get the members present to warm up with basic exercises for both body and voice. The outcome were renditions of “When the Saints go Marching in” and “ Swing Low Sweet Chariot” from the respective halves of the club. Without prejudice or bias I believe the Saints were the rightful victors! “Oh Yes they were”!

Your correspondent can only pray that “Swing low….” Will be sung with more victorious gusto in Paris on Sunday afternoon.

There is little doubt that involvement with music is proving to be an outstanding therapy for the elderly but more importantly sufferers of dementia.

PP Graham Syrett gave an appropriate vote of thanks on behalf of the club. On reflection I have decided not to mention his attempt at singing!

Programme of Events Find out more about Clacton Rotary Why not Volunteer?